Last week the Irish Government published the – arguably long overdue – Climate Action Bill and Low Development Bill, which sets out the strategy to help Ireland work towards becoming a climate resilient, biodiversity rich, environmentally sustainable and climate neutral economy. The Climate Action and Low Carbon Development (Amendment) Bill 2021 can be viewed here: https://www.rte.ie/documents/news/2021/03/127957-ab70a65d-68c1-4947-983b-babf920cc4dc.pdf. The Bill outlines the legal framework for reducing Ireland’s greenhouse gas emissions and contains the National Climate Objective, which commits Ireland to achieve carbon neutral status no later than the end of 2050. While traditionally transport and agriculture have been the sectors of focus for early climate action wins, buildings and construction are coming under greater scrutiny since the UN Environment Programme highlighted the role that the built environment must play in reducing CO2 emissions. This industry is accountable for almost 40 percent of carbon emissions related to energy use, which makes it an ideal target for Governments, including Ireland, to focus on. Carbon neutral status for Ireland will be achieved through a series of ‘carbon budgets’ that will be devised by the Climate Change Advisory Committee (CCAC). These carbon budgets will effectively limit the allowable carbon dioxide and other greenhouse gases emissions from each sector of the economy and will be evaluated in rolling periods of five years. In Ireland, there will be interim targets, which involves a reduction of  greenhouse gas emissions of just over half of the overall target (51 per cent) over the course of the first two carbon budget periods, ending on 31 December 2030.

Kevin O’Sullivan,  Environment and Science Editor for The Irish Times, published an article earlier this week exploring how the country can halve emissions by 2030. He describes the increased ambition and overall targets in the revised Climate Action Bill as “unquestionably onerous”. Of course, it goes beyond mere ambition. Ireland now has a legally-binding target to cut greenhouse gas emissions by 51 percent by 2030. While the sectoral targets have not been set out in the draft Bill, the Government will need to determine how to apply carbon budgets across the various sectors of the economy.  It is expected that key actions will be detailed in an annual climate action plan. While the Bill does not provide for penalties if targets are not met, according to The Irish Times, where actions fall short in particular sectors, Ministers with responsibilities in these areas may face budget reductions as the relevant departments have to “buy compliance”. While net zero by 2050 is in line with the latest EU target, it is not in line with Ireland’s fair share of the global effort to achieve Paris Agreement goals, which will require full decarbonisation much sooner.

From an industry perspective, Ireland-based AEC firms are on track to invest an average of €800,000 in sustainability initiatives over the next five years, as recently documented here: https://mckeon.ie/investing-in-sustainability/ 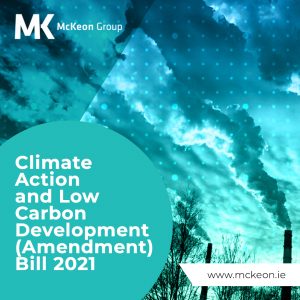 The Role of ‘Healthy Buildings’ in 2021  »
« Investing in Sustainability

According to several news reports over the past week, the Irish Government is expected to...

Is McKeon Group actually “a technology company posing as a construction group…”?   A...