“We put out a call to the people of Ashbourne, asking them to nominate the everyday heroes within our community, and they certainly didn’t disappoint! We received so many heartfelt nominations and heard so many touching stories about the great work local people do behind the scenes. All of this work adds up to make Ashbourne a great place to live, work, socialise and spend time. We are so grateful to have had the opportunity to reward those who go above and beyond to help others.”

Overall winner, Sabrina Wall, was named Ashbourne Hero and received a staycation voucher for Center Parcs worth €1,500. Sabrina was nominated nine times for her tireless work for charity, her positive spark and good humour and her ability to rally supporters. She never accepts praise and is always so grateful when others step up to help her.

In joint second place were John Fanning and Eugene Kennedy, each winning an Irish hotel voucher worth €750.  Through the nomination process, John was described as a “driving force for the betterment of Ashbourne”. He served on Meath County Council for 15 years. John has also helped to build Ashbourne into the town it is today – along with his trusted lawn mower!

In the wake of a number of suicides in the area many years ago, Eugene brought together a number of supporters to form Ashbourne Suicide Awarness & Prevention (ASAP). He has said “if we save just one life, it will be worth it”. Ashbourne is a better, safer place because of this initiative.

Our other finalists include Darren Donoghue, who set up Ashbourne Food Bank to help those who are struggling locally; Carol Hanley, who looked after frontline workers throughout the pandemic by providing meals, she also promotes suicide awarness locally; Sharon Hickey was nominated for her outreach activities within the community, helping newcomers get to know the neighbourhood, local businesses and community groups; Jack Holmes, who is described as one of the most active pensioners within Ashbourne, he is involved with numerous community projects including The Mens’ Shed, the Historical Society and the Ashbourne 2020 Committee; the youngest finalist, Charleigh Kavanagh, was nominated by her neighbours for donating money she received as gifts for her First Holy Communion to save the only green space in her housing estate; Garda Barbara Kelly has been recognised for going far beyond the call of duty with her willingness to help everyone and putting others needs ahead of her own; and Marta Modzinska was nominated many times, all nominations centered around her kindness and sincerity through lockdown during which she made sure everyone around her remained upbeat and hopeful.

Each finalist received a €50 voucher to spend in an Ashbourne business, together with a piece of custom artwork created by Gerardine Mhic Eoin.

Full details can be found at  www.AshbourneHeroes.ie 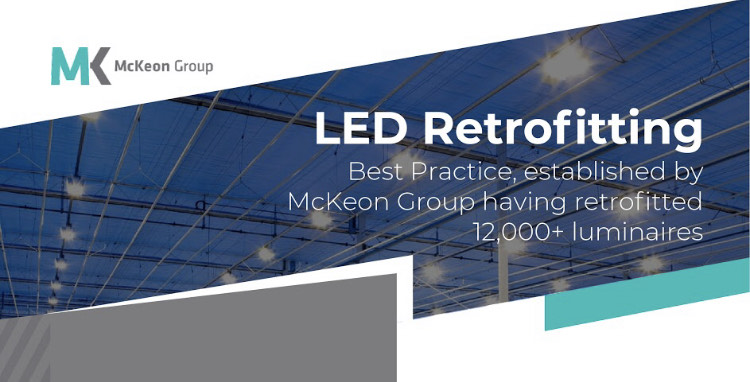 LED retrofitting refers to the replacement of older, generally fluorescent type lamps and luminaires. The long-term benefits of replacing dated lighting systems include significant saving on energy costs and lowering energy consumption (and waste). There are numerous factors that influence what energy reduction a client can expect, such as building occupancy, controls type and existing luminaire type whether it be T8 or T5 type lamps.  Having now retrofitted in excess of 12,000 luminaires, the Mckeon team are well familiar on the issues that can arise, particularly around the condition of the existing cabling infrastructure or indeed the condition of the emergency lighting, which does not fall under the SEAI grant scheme. While most emergency lighting installations are now designed with stand-alone luminaires rather than combined, there is still an opportunity for these to be updated.

Barriers to retrofitting: One of the persistent barriers to retrofitting is short-term thinking and the behaviour associated with that, specifically, the continued maintenance of outdated luminaires that are no longer fit for purpose, rather than replacing them with newer, more efficient fittings – despite considerable incentives to do so.

Incentives for retrofitting: There is a range of lighting-related grant incentives available, including the SEAI Better Energy Grant Scheme, to retrofit both domestic and commercial properties (conditions apply). Inclusion of commercial properties under this type of incentive scheme is a pioneering approach as similar grants in the UK are only available for domestic type projects, despite the fact that LED retrofitting is most beneficial and most impactful for commercial buildings.

LED retrofitting process: The first step is to undertake a comprehensive and accurate site survey of existing luminaires, this is the critical starting point in the retrofit design process.  This assessment dictates the type of luminaire required to replace the existing unit, whether it is a suspended, downlight, modular or other type of luminaire. The contractor undertaking the project must have a clearly-defined list of all luminaires to be replaced, and what they are to be replaced with. Getting this wrong can have major consequences for the outcome of the project, both practically and financially.  A measurement and verification (M&V) study must be completed on the building’s baseline loads, along with lighting loads, to ensure there are verified primary energy savings as confirmation to the retrofitting process. This allows for post-completion analysis on what the genuine savings are, rather than just tabulated data.

Luminaire selection: Luminaire selection must focus on product quality, with a minimum 5-year warranty and optimised L&B ratings, while representing good financial value. Under the SEAI grant scheme, all luminaires to be installed must be on the Triple E Register, which can be one of the more difficult parts of the process as every single luminaire and variant of each must be defined on the Triple E Register with its own individual LIG code.

Unintended consequences: In addition to the end-users’ positive experience, the upgrading of lighting quality quite often highlights the need to replace carpet, or to re-paint parts if not all of the space! 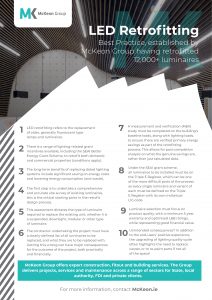 Accept All Cookie settings
Privacy & Cookies Policy
This website uses cookies to improve your experience while you navigate through the website. Out of these cookies, the cookies that are categorized as necessary are stored on your browser as they are essential for the working of basic functionalities of the website. We also use third-party cookies that help us analyze and understand how you use this website. These cookies will be stored in your browser only with your consent. You also have the option to opt-out of these cookies. But opting out of some of these cookies may have an effect on your browsing experience.
Necessary Always Enabled
Necessary cookies are absolutely essential for the website to function properly. This category only includes cookies that ensures basic functionalities and security features of the website. These cookies do not store any personal information.
Functional
Functional cookies help to perform certain functionalities like sharing the content of the website on social media platforms, collect feedbacks, and other third-party features.
Performance
Performance cookies are used to understand and analyze the key performance indexes of the website which helps in delivering a better user experience for the visitors.
Analytics
Analytical cookies are used to understand how visitors interact with the website. These cookies help provide information on metrics the number of visitors, bounce rate, traffic source, etc.
Advertisement
Advertisement cookies are used to provide visitors with relevant ads and marketing campaigns. These cookies track visitors across websites and collect information to provide customized ads.
Others
Other uncategorized cookies are those that are being analyzed and have not been classified into a category as yet.
SAVE & ACCEPT