McKeon Group has worked on numerous conservation and restoration projects on heritage sites, ranging from ancient castles to historical libraries.

Ireland boasts some of the oldest architecture in Europe and in order to ensure that these structures continue to stand the test of time, sometimes it is necessary to restore them using modern techniques. These projects often require a different approach to regular refurbishment due to the structural integrity of the building, what its intended purpose is and what regulations surround it. This often means that a specialist will be sought to provide guidance and advice, ensuring that no undue damage occurs to any element.

For example, a building could feature balusters that have been present for more than one hundred years. While they have been weathered and eroded, they are still functional. Therefore, it is possible to restore them without completely removing them, allowing them to be included in the finished product.

Here we take a look at three prestigious projects that we have worked on. 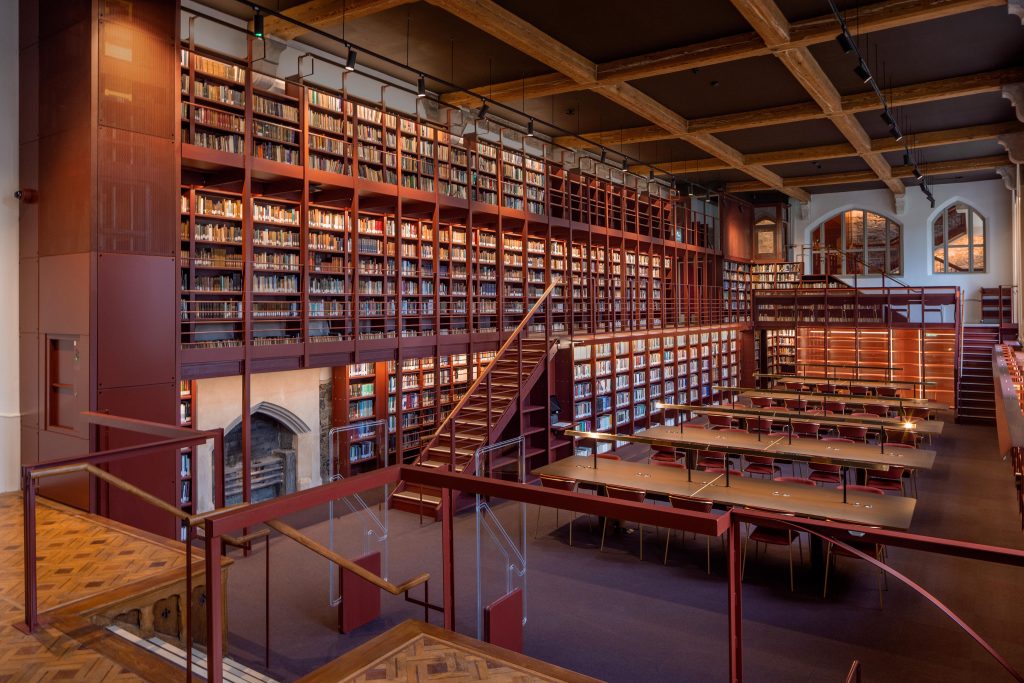 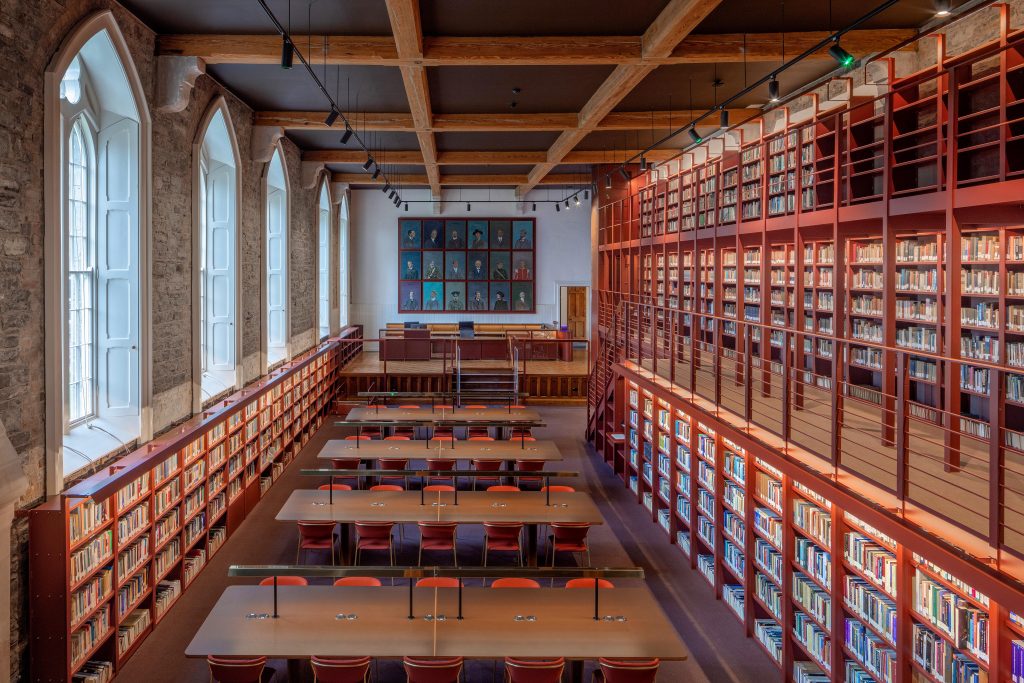 One of these projects involved Woodlock Hall in DCU. The restoration and fit-out of Woodlock Library, a protected structure, was a hugely important project to work on. It took place in the All Hallows campus 18th Century Senior House.

Woodlock Hall has been repurposed as a library across multiple levels inside the confines of the hall. We took special care to ensure minimal points of contact with the building. As a result, this allowed us to maintain as much of the existing structure as possible. The refurbishment also saw the restoration of bespoke features. This included the relaying of historic timber floorboards, the restoration of the original wooden paneling, timber doors, and sash windows. We also installed sustainable energy solutions, including geothermal heating.

We feel privileged to have worked on this project that has given new life to a historic building. Plans for the restoration of Woodlock Hall began in 2018, coinciding with an agreement between the University and the Irish Jesuits in 2019. Following this, they agreed to transfer the library collection from Milltown Park into the care of DCU Library.

We undertook careful internal deconstruction of the lobby area to the front of the hall to facilitate the installation of a new multi-story lift on each floor. Housed in a glazed facade is a prefabricated metal stair system.

We collaborated with Mullarkey Pedersen Architects for this project and the works were completed in 2020. This project also landed a prestigious AAI Award. 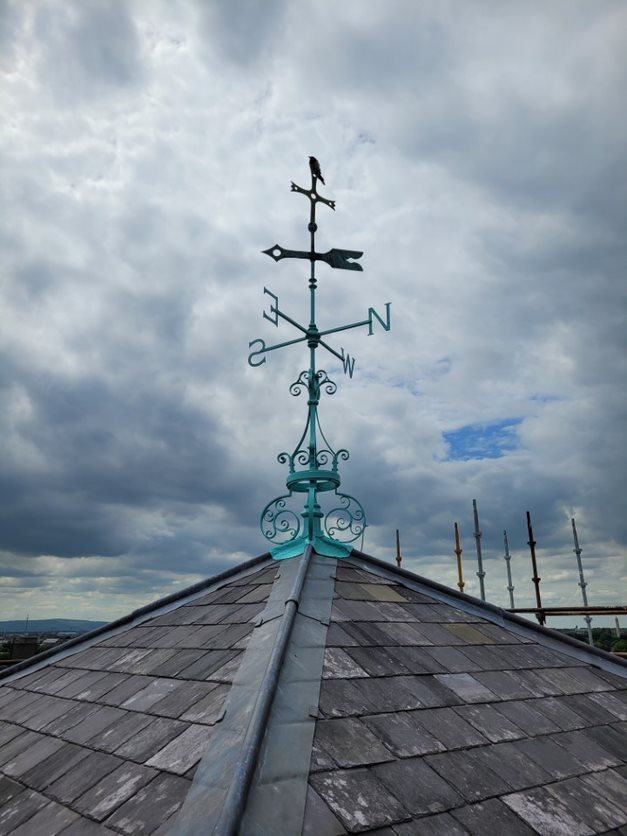 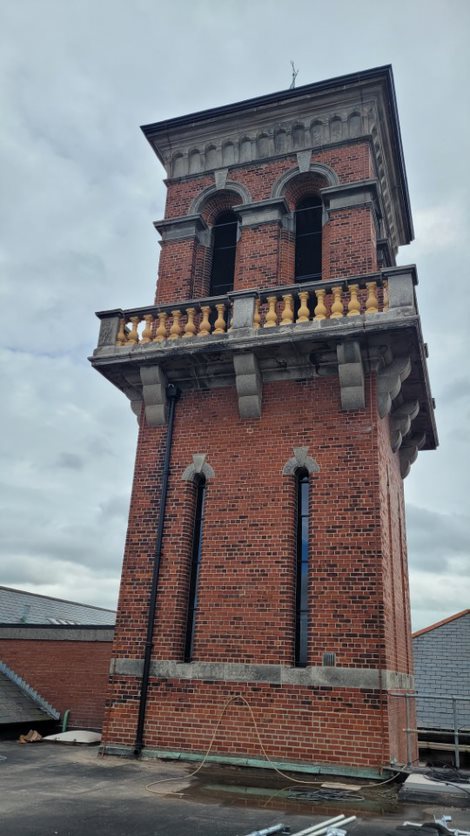 This conservation project required McKeon Group to work closely with specialists Nolan Conservation Group to ensure that all works did not damage the structure.

In order to restore this extraordinary building, we completed a full refurbishment which wrapped up in August 2022.

Since being built in 1890, this was the first full refurbishment carried out. While there had been some maintenance works including the repointing of brickwork, nothing as in-depth as our works had been completed.

This involved raking and repointing brick and stone work on the tower, refurbishing the drainage pipework, guttering and tower windows, and cleaning and repainting the existing ironwork including a spiral staircase, bell yoke, and weathervane.

We also completed the refurbishment and replacement of clay balusters, replaced the slate roof tiles on top of the tower, a full in-depth clean of the inside and outside of the tower, installed lighting pendants, and then installed a new access platform to the tower.

But our work didn’t end there as the roof also required a major rework. This included the removal of existing redundant fire escape steel stairs, refilling openings at window locations, installation of missing stone cills, and finally completing a new platform walkway over services. 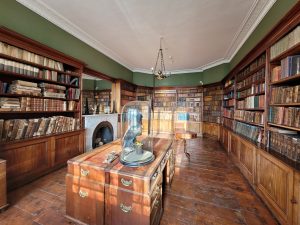 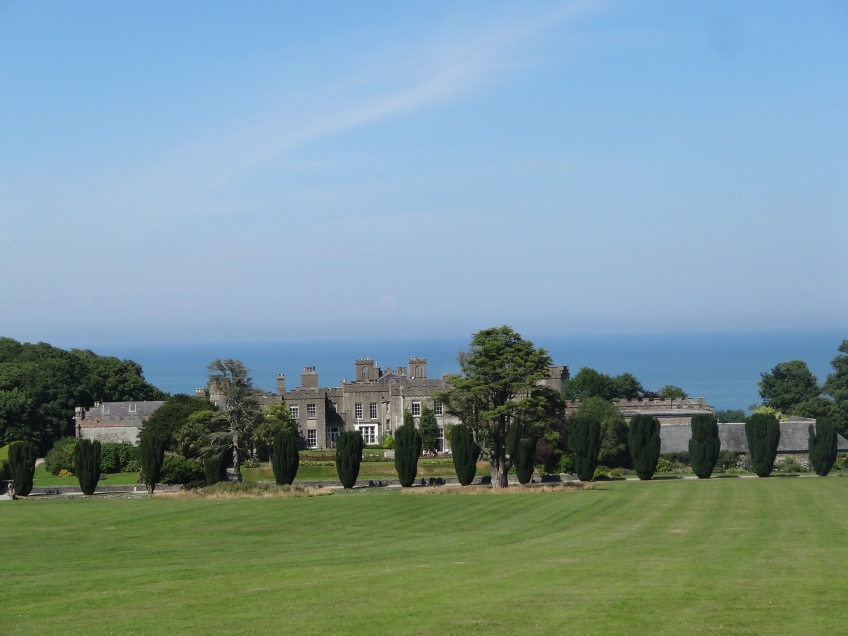 Nestled in the rolling hills of north county Dublin, Ardgillan Castle was built by the Reverend Robert Taylor in 1738. The house remained in the Taylor family until 1962 when the estate was sold to Heir Henrich Potts of Westphalia.

In 1982, the estate was sold to Fingal County Council and with the help of formerly FÁS now Solas, renovated the house. It was officially opened to the public in 1992 by then-president Mary Robinson.

For anyone unfamiliar with this popular visitor attraction, Ardgillan Castle and Demesne sits on close to 200 acres, between Balbriggan and Skerries, overlooking the Irish Sea with views northward to the Mourne Mountains. Described as Ireland’s hidden gem, the castle is a family favourite for tours, theater events, parties, and more.

McKeon Group was tasked with the repainting of ceilings and walls, joinery, and radiators on the ground and the first floor. We then completed refurbishment works on timber floors. This project involved carefully dealing with the associated antique furniture and art removals, which we then successfully reinstated.

McKeon Group is on Fingal County Council’s conservation restoration framework and have worked on a number of prestigious buildings in the locality, including Malahide Castle.

With more than 70 years of experience in the construction industry, McKeon Group are capable of reaching and exceeding the goals of our clients. If you have a conservation or heritage project that you would like us to help with, contact our construction team today. 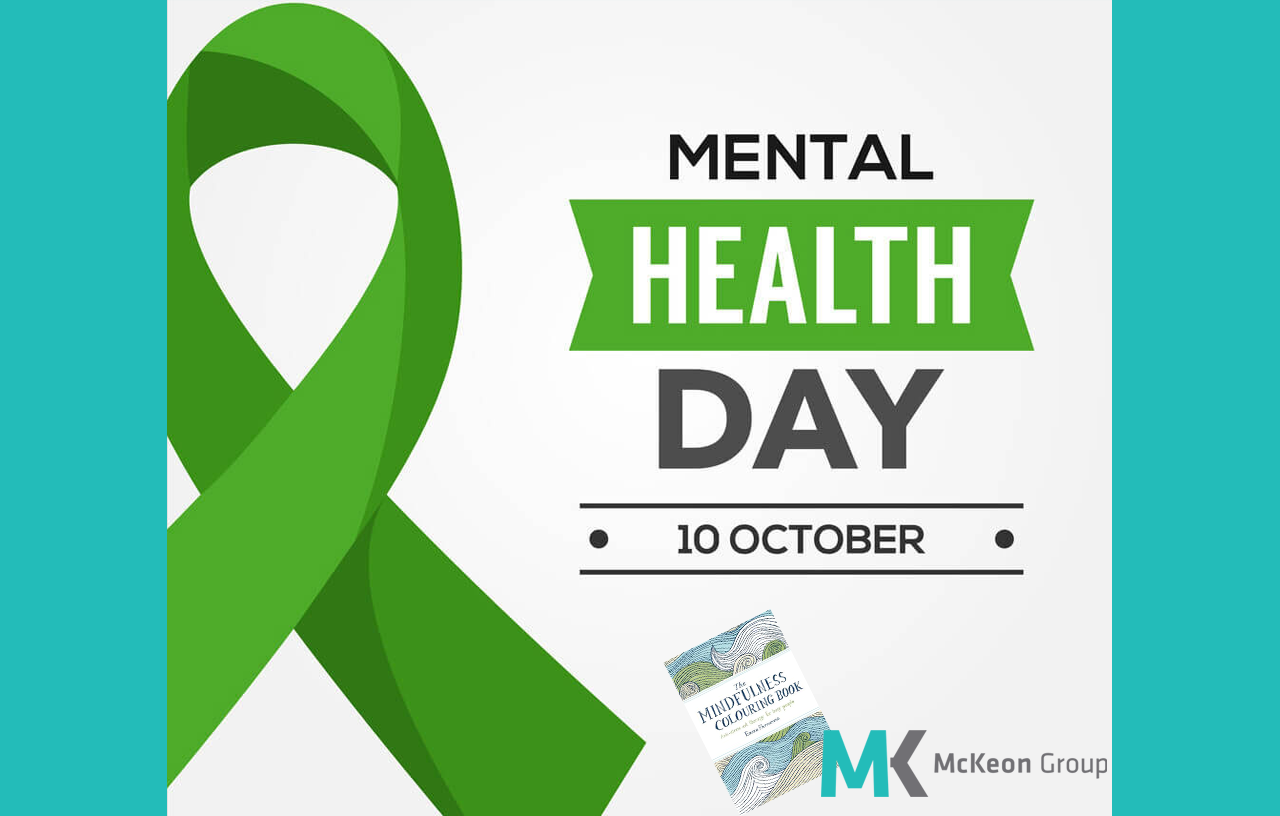 CIF Construction Safety Week 2022 is scheduled across the month of October beginning on Monday the 10th on World Mental Health Day. The focus this year is on supporting the Lighthouse Club’s Help Inside a Hard Hat campaign.

To kick things off for Construction Safety Week, McKeon Group marked World Mental Health Day 2022 with a catch-up in DCU. We currently have several projects underway in DCU, so most of our site-based staff are based there, so it was the perfect location for us to all gather. This catch-up aimed to highlight that it’s not just about talking but listening too – if someone starts to open up, the best thing you can do is listen – no one needs to have the solutions, just being an ear can help.

We started the day by grabbing a coffee and some breakfast in DCU’s main restaurant, followed by a coffee-style chat in one of their lecture theatres. It was a lovely opportunity to take a couple of hours out to focus and regroup before the work week began.

Ruan Kennedy, Chartered C. Psychol.PsSI, Certified Sensorimotor Psychotherapist and Senior Counsellor at Dublin City University, kindly joined us to give us a little insight into stress management and provided us with great exercises on how to manage our stress levels.

We finished up with a little gift from the company of a mindfulness colouring book and some colouring pencils along with information about our Employee Assistance Programme (EAP).

Help Inside the Hard Hat

The Help Inside the Hard Hat campaign, aims to raise awareness of poor mental health within our industry. In the UK and Ireland, two construction workers take their own lives every working day. As well as this, stress, anxiety and depression account for a fifth of all work-related illnesses.

This campaign is providing a huge range of proactive support and resources for our construction community including a 24/7 Construction Industry Helpline, a free app and mental health training.

Mental health covers a wide range of issues, including mild or moderate anxiety and stress, drug and alcohol abuse and disorders such as severe depression and schizophrenia. However, workers’ mental health and well-being also relate to their general mental and emotional health and their ability to cope with the normal stresses of life.

According to the Institute for Health Metrics and Evaluation (IHME), 18.5% of the Irish population has a mental health disorder. This places Ireland 3rd highest in Europe (after Finland and the Netherlands) in the estimated prevalence of a mental health issue.

There is a need for a supportive infrastructure within the sector, given the larger proportion of men in the workforce and the traditional beliefs amongst Irish men to avoid seeking psychological support for mental health issues. In recognition of the importance of mental well-being in the construction sector, the CIF conducted research with employers to explore their experiences of managing staff and the key issues they face concerning mental health.

Companies across Ireland overwhelmingly accepted that mental health is a pressing issue in the construction industry, with 98% of employers agreeing that it has important health implications.

The issue of managing staff mental health is no doubt made more difficult by some employees who may be unwilling or uncomfortable with reporting mental health difficulties. Interestingly, 68% of companies believe the construction sector has a serious issue with staff underreporting issues with their mental health in the workplace.

McKeon Group Health and Safety Manager Veronica Lavelle said: “It’s good to talk but also so important to listen if someone opens up. You don’t need the answers or solution, just being there to listen is a big help.”

Learn More About the Lighthouse Club

The Lighthouse Club is the only charity that provides physical, mental, and financial well-being support to construction workers and their families in Ireland & the UK.

Whether you’re an employer or an employee, the helpline provides the first point of contact for those who need to access a range of completely confidential support services.

Accept All Cookie settings
Privacy & Cookies Policy
This website uses cookies to improve your experience while you navigate through the website. Out of these cookies, the cookies that are categorized as necessary are stored on your browser as they are essential for the working of basic functionalities of the website. We also use third-party cookies that help us analyze and understand how you use this website. These cookies will be stored in your browser only with your consent. You also have the option to opt-out of these cookies. But opting out of some of these cookies may have an effect on your browsing experience.
Necessary Always Enabled
Necessary cookies are absolutely essential for the website to function properly. This category only includes cookies that ensures basic functionalities and security features of the website. These cookies do not store any personal information.
Functional
Functional cookies help to perform certain functionalities like sharing the content of the website on social media platforms, collect feedbacks, and other third-party features.
Performance
Performance cookies are used to understand and analyze the key performance indexes of the website which helps in delivering a better user experience for the visitors.
Analytics
Analytical cookies are used to understand how visitors interact with the website. These cookies help provide information on metrics the number of visitors, bounce rate, traffic source, etc.
Advertisement
Advertisement cookies are used to provide visitors with relevant ads and marketing campaigns. These cookies track visitors across websites and collect information to provide customized ads.
Others
Other uncategorized cookies are those that are being analyzed and have not been classified into a category as yet.
SAVE & ACCEPT